Age 89 with Ollie and Bernadette 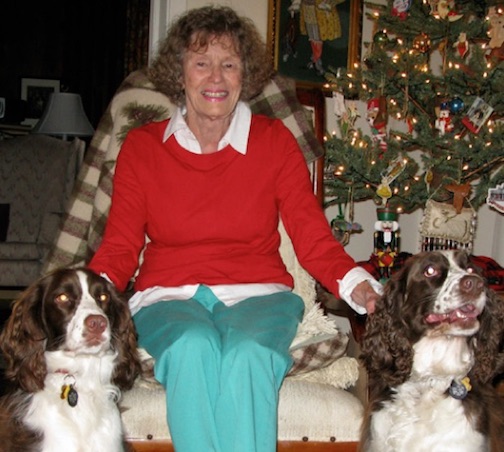 A daughter of the Great Depression, Lila McKendrick Arrowood was raised by a single mother in Price, Utah, with her brother Bud and sister Ellen. She was the oldest of the three children, who were never wanting in the necessities of life. In fact, their entrepreneurial mother worked hard in her laundry business to make sure that her children would also have those things that would feed their souls. Bud tinkered with cars and honed the mechanical skills that would lead him to serve his country in World War II and later to earn a degree in engineering. Ellen and Lila pursued music and art, Ellen on the clarinet and Lila playing her violin in the high school symphony.

The twists and turns of Lila’s life were remarkable, given her quiet shy nature. She was an innocent sweet girl with vibrant blue eyes and soft golden hair. She weighed just 95 pounds and stood 5 feet 5 inches tall. Her smile was brilliant. When Henry Elbert Arrowood, a boy from the hills of Kentucky, first saw her, he knew that she would one day be his wife. His stint in the CCC’s had brought him west. When he returned east, he brought his bride and their baby boy Clinton. That was in 1939.

Theirs was an adventurous life, moving wherever Henry could find work to support his young family. And, he always found work. They lived in Ohio, Kentucky, and finally in Baltimore, Maryland. Eventually, after the birth of their daughter Ellen in the mid-1950’s, Lila also entered the workforce. Unusual in her day, she opted to work outside the home. With the added income, she and Henry could build a house outside the city in rural Carroll County, and together they carpooled to Bendix Corporation where they both worked. Lila tested radios. Ironically, Lila had little mechanical skill, but true to her determined spirit, she learned what to do in her job and excelled in it.

Throughout her life, Lila worked hard. She loved to paint, to clean house, to cook, and to do laundry. Lila loved things clean and neat. She preserved the fruits and vegetables of Henry’s garden and helped him pull the weeds. They went to dances and played cards with their friends. In retirement, they lived happily in Florida. Lila and Henry were devoted to each other. Both loved animals and brought innumerable pets into their home, even a ground-hog found along the road during a trip to Kentucky. Polly was her name, and daughter Ellen delighted in her antics.

A gentle soul, Lila Arrowood walked this earth respectfully. She left no indelible mark, except in the hearts of those who knew her and loved her. In my life, she made all the difference. Her humble voice remains with me.

Princess Lila is a story created out of my experience with Mom in the final stage of her life. After a traumatic night alone when she fell and broke her hip, Lila needed rehabilitation. But, moving into the nursing facility proved more traumatic for her than any of the hard work to make her physically strong again, and an experience she could not overcome. She was a strong-willed lady, who missed her home and independence. She only looked forward to my daily visits and our time together. In the end, even that could not sustain her. She was tired. She was ready to be at peace.

It was during those hours together that the stories were told. The childhood memories. The critters she had loved throughout her life. The husband and son she had lost. The homes she had lived in. It was the growing-up stories that she remembered most. Perhaps, because I asked her about it.

At first, when she was feeling stronger, we would go to the lunchroom together and sit with other patients at the center. A theme of childhood memory began to resonate. There was Mary, who talked of train rides to visit cousins and friends in rural Virginia and of one visit when she “missed” the train home, and Beverley, who remembered being naughty and caught in a lie. I began to think about the many stories and how they shared the same elements of innocence and wonder. The same clarity of detail and nuance. They were stories of when they were young and yet were told as if they had happened yesterday. Not unlike the children of the generation before them or the children now, the antics and predicaments of youth are ever the same. And like Beverley’s recollection, each of these ladies at our lunch table snickered about a time they had been bad.

That is when I began the project of I Cut the Curtains and Other Childhood Tales. I wanted to give voice to those memories. Beverley, especially, impressed me. She was younger than the rest but debilitated by a neurological disorder and early dementia. She repeated her story every day at lunch. Ruminating on her mashed potatoes, she would gesture toward the large window with striped brown and orange and green curtains, and she would say, “That reminds me of the time I cut the curtains.” With the same cadence and soft southern drawl of the time before when she had shared the story with me and of the time before that, she would recount the story verbatim. She would pause at the right spots. She would chuckle at the same moment in the story when her father inadvertently revealed the truth of who DID cut the curtains, not Daddy, as little Beverley had tried to convince her mother…

Mom’s story was the first day of school. She had a vivid memory of it. The eldest of three siblings, it was she who had to do it first. And she didn’t like it, not one bit. The only good part of it, and what she remembered most especially, was that her estranged father, whom she adored, would be coming to the house to take her to school. I think that memory evoked every sense in Lila. She could smell his cologne, see his image in the sun-filled doorway, and feel his hand touching hers. I think she heard his voice as he shared his same feeling of foreboding on his first day at school. And, she was gleeful recounting how she ran from the schoolyard at recess and made her way home. She had been “bad.” This is her story and how she expressed it to me…

Princess Lila from I Cut the Curtains & Other Childhood Tales

The stories begin with Lila.  Princess Lila.  That’s what the little girl, who visits her grandparents in room 210, calls her.  She skips down the hall, clinging to her mother’s hand.  Her brown curls shine in the fluorescent light.  She stops in front of Lila’s wheelchair.

Lila’s blue eyes dance.  She smiles a wrinkled smile and reaches out to touch the child’s hair.  “Such a pretty little girl.”

“I can tell by your sparkly pink shoes,” observes Lila.

Gia holds her mother’s hand with both of hers and does a little dance on tiptoes.  “I’m going to see Gramma and Grandpa.  They got hurted in a accident.  What happened to you, Princess Lila?  Did you fall down?”

“Come along sweetie.,” interrupts her mother.  “Grand’s are waiting.  Give Princess Lila a hug.”

She leans into the wheelchair.  Lila holds her close and gives an air kiss.  Gia kisses her cheek.  “Goodbye, Princess Lila,” she whispers in her ear.

“Goodbye,” whispers Lila.  “Be a good girl in school.”

Lila watches the two disappear into room 210.  She remembers when she was a little girl, just starting school.  Lila remembers her very first day.

“Yes, you do,” replied Lila’s mother.  She was bent over her ironing board pressing a white linen dress that belonged to Mrs. Young.  Mrs. McKendrick scowled, licked her fingertips and touched the base of the iron.  “Too cold,” she muttered and walked to the stove.  Using her skirts and petticoat, she picked up the burner’s cover-plate and placed it over the flame.

Mrs. McKendrick lowered the iron onto the stove and turned to her daughter.  “I expect you to be a good little girl.  Lila McKendrick, you WILL go to school and you WILL like it.”

Mrs. McKendrick knelt and held her daughter’s shoulders square.  She looked directly into her damp blue eyes.  “It is your turn to go to school.  The oldest.  Your brother and sister will join you in their turn.  Do you understand?”

“I don’t want to,” pouted Lila.  She looked down at her new black boots and crisp gingham dress.  She liked the dress but not the shoes.  And, she didn’t like school.

“Lila, I’ve had enough of this.  Your father will take you.  Now, that will be fun, won’t it?” encouraged Mrs. McKendrick.

“Daddy?” Lila smiled.  Her blonde curls and blue bows rose upward as she met her mother’s eyes.  “Okay,” she agreed.

“Good.  Now, sit at the table until he gets here.  Don’t muss your dress.”

Mrs. McKendrick returned to the stove, lifted the iron, and tested it again.  The spittle sizzled and popped.  While Lila waited, her mother ironed.  She used vigorous strokes to a starched perfection. Her business was laundry, and she knew how to do it.  Lila loved watching her mother work.  Only the knock at the door pulled her gaze away.

“Daddy,” she cried.  He lifted her up, and she hugged him tight.

“How’s my little school girl?  Ready for the first day?”

He gently placed her down and knelt on one knee before her.  With the tip of his finger he pushed back the brim of his gray felt hat.  He straightened his tie, and he crossed his arms as he leaned into within inches of his daughter’s nose.

“Lila, there are things in life that we think we don’t want to do, but you know what?”

“Sometimes those scary things end up bein’ the best things we ever did.  Take school, for instance.  I didn’t want to go either.”

“No, ma’am.  But I went anyway.  Cause your granny, my mama, said I had to or else.  I guess I was more scared of the or else than school, so I went.  And you know what happened?”

“I met my best friend, Maynard Pickens.  On that first day of school.  And we been friends now for 25 years.  Now, what do you think about that?”

“Well now, that’s right nice that you’ve already got a best friend, but I know you will meet more boys and girls.  Come on.  Kiss your mama goodbye and take my hand.  We’ll walk to school together.”

Lila started to protest, but her daddy raised his finger to her lips and gave her a knowing look.  She went to her mother and kissed her cheek.  Lila turned, head bent, and took her father’s hand.  They walked the ten blocks to Price Elementary School.

“Be a good girl in school,” said Mr. McKendrick.

But Lila had other plans.  When Teacher rang the bell for recess, Lila darted out the door, down the street, and didn’t stop running until she reached her mother’s kitchen.  Daddy was there, too.

He swung Lila up to his shoulders.  While they walked the ten blocks back to school, her daddy told Lila that twenty-five years ago his teacher rang the bell for recess and HE darted out the door.

“I didn’t stop running until I reached MY mother’s kitchen.  And you know what?”

“MY daddy was there, too.  He swept ME up to sit above his shoulders, and he walked ME back to school.”  Mr. McKendrick lowered his daughter.  “Be a good girl in school, Princess.  I’ll be here at the end of the day, and you and me can stop at the penny candy store on the way home.  Now, how does that sound?”

It sounded good to Princess Lila.  She smiled a wrinkled smile.