The first book is now available!

The Adventures of Elliott Clinton Rat, III:
My Journey on the Merrimack and Concord Rivers 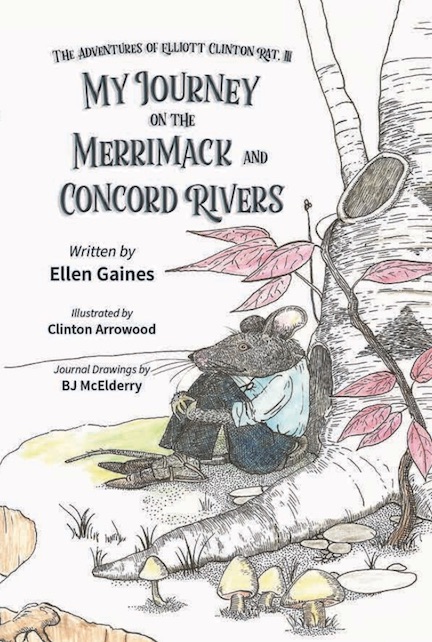 Today marked an important turning point in my life. I announced to Mama that brother Bew and I would begin our journey. As dreams are the touchstones of our characters, it was time for us to strike out on our own and do this thing that we have planned and hoped for so long.

Elliott’s first entry into his journal portends the adventure that lies ahead for him and his brother. They leave Lowell and navigate the convergence of the Merrimack and Concord rivers in a raft, seeking a place where they hope to embrace a simpler existence. Simplify, simplify, simplify… Elliott’s story is inspired by Henry David Thoreau’s A Week on the Concord and Merrimack Rivers, a recounting of the journey taken by him and his brother John.

Surprising twists and turns in their trip deliver Elliott and Bew to Concord, Henry’s home. Will the brothers have more adventures at the river’s end? Will the daredevil Bew find his place in this thriving village? And, will Elliott connect with the kindred spirit of Henry David Thoreau? Find out in The Adventures of Elliott Clinton Rat, III: My Journey on the Merrimack and Concord Rivers.

Elliott’s Life in the Woods – The sequel featuring Elliott, his brother Bew, and friend Sammy Skunk!

One year after his arrival at Walden Pond, 19 September 1846, Elliott reflects on his time living in the woods by a pond with Henry David Thoreau and invites the reader to learn about his life there…

Epilogue to The Adventures of Elliott Clinton Rat, III:
My Journey on the Merrimack and Concord Rivers

“It is a great art to saunter.”

I have come to observe over time the habits of these woods at Walden Pond and of the man who shares this place with me. Not long after my arrival, there came visitors from the village who shed light on Henry’s relationship with man. For those who think of him a solitary person, I beg to differ. His friendships are many, and the deepest and most cherished are with children. They flock to him and embrace his joy of life and nature. The animals and birds of his forest and field, the pond, and sky are given equal respect to human interlopers here – perhaps even greater reverence and tenderness. A mouse frequents the camp, as does a taciturn muskrat whose quietude is sometimes interrupted by people and events. There is a woodchuck who has re-located after an encounter with Henry that can only be described as the straw that broke the camel’s back on Henry’s part. Somehow, he took umbrage at his bean plants being eaten to oblivion. A few in passing might have been tolerated, but rows and rows munched to the nubs was another matter altogether.

We – that is, Henry and I – have seen autumn’s ruby reds and golden glow and russet browns turn to ice and snow. The ripples of Walden Pond became solid and thick in glassy dark green hues that reflected no light, and I replaced my hard hickory knot for a warmer bed beneath the floorboards of Henry’s fire-lit warm and cozy cabin. I have seen the melting ice and watched the first snow drops peek pearly white from beneath the thawing earth. Summer brought greater explosions of color and fragrances mingled in longer daylight. From within his hovel and without I have been with Henry, sauntered his haunts, frequented his daily oblations, and re-connected with Bew and even Sammy for further adventures.

In fact, I have come full circle, for it is now one year since arriving at Walden. I settle in this early fall night with journal and pencil, reflecting upon what has remarkably been and looking forward to what will be. As I review the events of this past year, my recordings herewith shall reflect my life in the woods since I arrived here… part two of my journey finds me not on the river but by a pond and with “The Man of Concord,” one Henry David Thoreau… 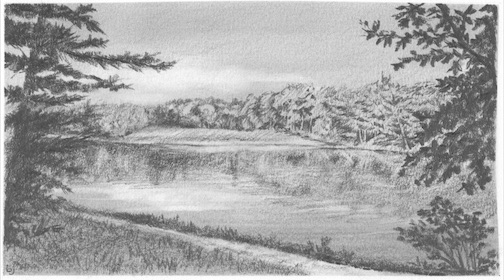 Preview of Ellen Gaines’s sequel based on Walden,

Elliott’s Life in the Woods…

A beam of sunlight flickered across my face. Wincing awake that first morning at the pond, I moved to an achy upright position. It had been easy to fall asleep the night before when Henry Thoreau’s lamp dimmed and the cabin became quiet. Morning light, however, revealed the knot in the tree that had been my bed. “I will need to improve this nest of mine or find a better home,” I complained.

My arrival at Walden Pond had been too late for exploration. I’d entered a new place with a man I did not know and who did not know me. He had no knowledge that I even existed, secreting into the back of his wagon as I had done the night before. When the Village of Concord disappeared behind us in the gathering dusk, we roiled through high meadow grasses that bordered a wood. Henry’s borrowed livery delivered us to a cabin he had built. A deepened twilight engulfed the homestead and nearby shore. After having unloaded the food and supplies he had obtained in town from Shattuck’s General Store, Henry struck out on a brisk walk, disappearing into his familiar surroundings. I had scurried up this hickory tree instead of attempting to follow him. There would be time enough for that to take place, I was sure.

My senses alert, whiskers twitching, I now focused on the smells and scenic beauty of this quiet place filled with mottled early light. Walden Pond twinkled. Its surface rippled in the breeze. Warm and wet earthy odors filled my snout with expectations of summer flowing into fall. I breathed a great intake of air, exhaled, and stared out into the cove. Just then, a sweet trilling sound wafted up to my branch. It was a sound unlike any bird I had heard before. Indeed, it seemed not of the forest at all. What can it be? I thought and listened.

It came from somewhere near Henry’s cabin. Before I could reach the ground, it stopped. There was no sound, and then the crickets took up where the trilling had ended. Henry emerged through his cabin door, naked save for the straw hat on his head. He carried his shirt and trousers and headed to the pond. Dropping his clothes on a large rock, he removed his hat and slipped into the water, making large circles in his wake. He dove and swam with long strokes. Returning to land, he shook out his brown hair, spraying water in an arc around him. He flapped his arms and legs to the same effect, placed his hat on his head, and sat on the sandy shore. His deep breathing slowed, and he remained motionless, gazing out across the water to the other side, where a muskrat busied herself building shelter against colder temperatures soon to come. There he stayed for some time, drying himself by the rising sun.

“Bon Jour, mon ami!” shouted a voice from the field where Bess, Mr. Hosmer’s horse, had stayed the night before. “It is I, Jean!”

Thus, begins Elliott’s Life in the Woods. Jean, the Alcott’s, Mr. Emerson, the Hawthorne’s, and other sundry townspeople, transcendentalists, neighbors, and friends people the woods and town of Henry David Thoreau. Sammy returns for mischief, and Elliott discovers the mysteries of Walden, including the source of that lovely early morning trilling sound.

Will he and Bew survive the dangers of this world that appears to be tranquil and safe? Do we hear the squeal of the long-tail weasel again? Or see the soaring owl-hunter return for his lost meal? And, do Elliott and Bew “keep one eye open,” as Papa had warned them to do when they sleep…

Elliott’s Life in the Woods

Murder in Estabrook’s Woods – The next project!